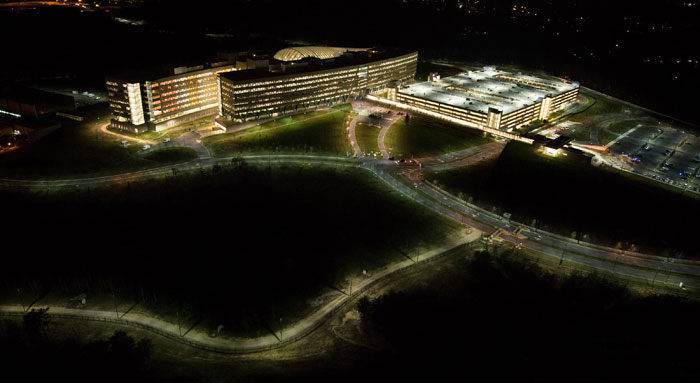 See this article in full with images at medium.

The rich and creepy aesthetic of the surveillance state

There is something so dry and difficult about the mainstream narrative of Snowden-era mass surveillance. The discussion is often heavy and demands that we think about the internet’s puzzling plumbing. Such an important issue wants highlighting with multiple palettes.

We already have a grand history of literature and art posing the problem. George Orwell’s tale of voyeuristic tyranny, 1984, may be one of the most referenced books in politics.

Snowden: spy for the people, here in the trailer for CitizenFour. Television and film give regular snapshots of spy culture, and Citizen Four, the inside story of Snowden blowing the whistle, casts the man in a decidedly romantic light. Beyond that, we need other aesthetic approaches to help us grasp the severity and strangeness of today’s omniscient state. Here’s a peek at some inventive applications of the theme across art, design and in between.

Cameras are everywhere. In our streets and stores, our phones, our laptops and soon on our spectacles and drones that hover through our towns. Many are equipped to recognise your face for data. CVdazzle technology incorporates cutting-edge, anti-recognition design with striking, sartorial ensembles.

It pioneers the anti-face, where asymmetries and oblique patterns work to confuse machines which non-consensually register your presence.

In future fashion, being seen needn’t mean being tracked.

What relationship do we have to the devices that come with us everywhere, ready to spy as we go?

The iPatch, DIY design against spying products, seen at the covercam blog.

Why does the default hardware setup of a MacBook Pro, for example, thrust its camera unquestioningly in your face, when we know it can be hacked, by criminals, trolls and other rogues? It’s the stuff of nightmares.

This problem of product design finds focus at covercam, a Tumblr set up to list DIY efforts to block laptop webcams and the bemused sentiments of their owners.

The Nope webcam shield is a target-beating Kickstarter spot which answers the same itch with a neat pair of magnets.

People are being driven to bodge their consumer goods to counter the threat. Digital intrusion is such a personal thing, affecting home life and psychology, and it needs to be seen and described as such.

These projects catalogue ad hoc solutions to the sinister reality rapidly engulfing us.

His documentation gives a rare view on the bizarre aesthetic built up by these lavishly-funded, black-ops brigades. Tasked with making the most intricate, intelligence-gathering system possible, all out of the public eye, they have constructed an epic, cloaked chimera. No other human formation spans so many sites so stealthily, with such grandeur.

Yet it is also quirky and even humorous.

Paglen remarks on the culture of military insignia, which regularly mimics fantasy art and cartoons as covert groups playfully represent their super powers with dragons, wizards, lizards and sea monsters.

These fanciful beasts give a view on the inner myths in place to motivate the task of tracking everything everywhere.

Which is hard work, of course. The human side of faceless agency operatives surfaces in Ask Zelda, the NSA internal agony aunt’s column.

Some of her tender reflections appear as part of their online transparency documentation. That includes a spicy, somewhat ironic letter from a staffer, pen name Secret No Longer:

Art for Spooks takes this sort of material as the basis for an exploration of the NSA’s psyche. Besides office gossip, a varied stew swirls with:

“…the development of encryption and psychological profiling tools modelled on alleged historical links between magicians and the military; and a delirious imaginary steeped in the world of modern folklore, populated with UFOs, popular media archetypes of evil and good…”

There is no more spirited, popular vehicle for exploring the dark side than Halloween. As a relevant example, people now commonly dress as terrorists to ‘celebrate’. The flipside to that macabre performance is to sensationalise the fears we have about unseen forces observing our online lives, often in the name of saving us from terrorism.

Trevor Paglen has dug up embroidered badges designed by secretive army units to bond and artistically express themselves. Here a monster octopus spans the world, as all hungry intelligence groups aspire to.

The mass surveillance theme is yet to make an impact on the Halloween circuit, but there’s plenty of material to make it float.

It is genuinely creepy to think about the strangers, silently watching and judging in control rooms and security labs.

Perhaps we’ll see a spate of new outfits and games in honour of this growing, global phantom.

Here I offer a spooky spooks party trick to play on your friends. As with any prank, make sure it is legal in your jurisdiction before going ahead, and be sure to pick on strong-minded individuals.

Choose a target with sufficient internet material accessible to play with. Select a few photographs, facts and quotes to fill out a small factsheet about them.

Actual facts plucked from social media mixed with fabricated quotes will make their head spin. Once you’ve completed the sheet, print some out and drop them around the party secretly.

The right person will be bemused and creeped out. Others will laugh at this surreal vision of a friend, whilst the friend tries to work out who’s profiling them.

Again, this prank requires judgement and taste to work well. Just as you wouldn’t hit grandma with The Ring wake-up prank due to her frail heart, so you wouldn’t play this one on shy Charlotte.

A well of inspiration

The surveillance state’s myriad shadows give us a vast and urgent source of artistic inspiration.

Fantasists and creatives will find many paths through the cyber security complex and its associated fears. It’s rare to hear musicians sing of digital strangers creeping in their bedroom, but there must be a thousand songs in wait.

We’ll surely find part of that narrative includes reflections on whether anyone cares that you might be spied on in your own home. Digital Natives are born into a world of leering lenses and may claim to care less about the watchers. But maybe there’s a line that nobody really wants crossed, just like with vampires: cool in a nightclub, not in your home.

When you consider that the cyber snooping threat comes from criminals, trolls and other kinds of creeps, the pool of inspiration multiplies. This is a world where your phone could snap you nude and show the world before you’re out of the shower.

As I write this, my computer glitches in a way it never has before: the screen cuts out for just a second, and back to normal before I have a chance to respond.

Is this an agent, indicating his presence, in his own, subtly imaginative way? An untraceable intervention in my day’s work, designed to shake belief in the intimacy between me and my machine?

Since Snowden, we have good reason to think our digital worlds are being watched. A joke you thought vaguely funny, but certainly not dangerous, might just contain the wrong keyword, at the wrong time, setting a watchman on your case. As you imagine that possible voyeur, imagine his possible sense of mischief.

Artfully he observes your key strokes, ready to glitch your screen, redirect your mail or alter your mood, a la Facebook. It all depends on how you behave, what disruption you cause to (a certain idea of) National Security, or even how far he falls in love with you.