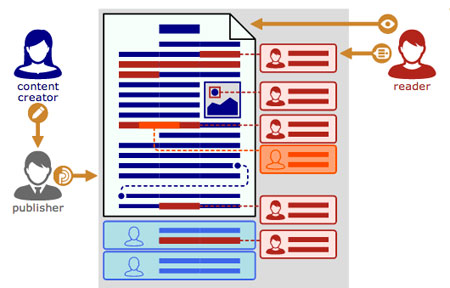 Annotations on articles turn reader’s comments into surgical probes, putting insights right next to the words they target. There’s reason to believe that annotations systems, done well, could Wiki the whole web, bringing collective thinking to every item on the internet.

The hypothes.is project aims to do that as a webwide, independent, user-voted annotations platform. When you visit a page, their browser extension flanks it with user thoughts, even if it has no comments sections, or has some other obstacle to reader contributions.

Websites can also build it right in, which is why you see the sidebar in the right margin here on this site. Try it out by clicking and commenting. That comment will be hosted elsewhere outside of my control.

Whilst the project in itself excites, the underlying mechanism, which produces a structured overlay to the entire web, a sort of superstructure, has utility beyond the annotations system at its heart. It can provide a means of closely complementing all web matter with information not included (or even sanctioned) by the publisher, in an openly accessible fashion.

At a recent gathering in Berlin, we considered the idea of attaching a suggested action, like a petition or campaign, to web articles. The hope was to facilitate action at the moment people encounter issues online.

Implementing such a feature where desirable (which is everywhere, potentially) is a problem best handled at the meta-level, probably with a browser extension, and without the blessing of the myriad publications one would expect to see treated in this way. 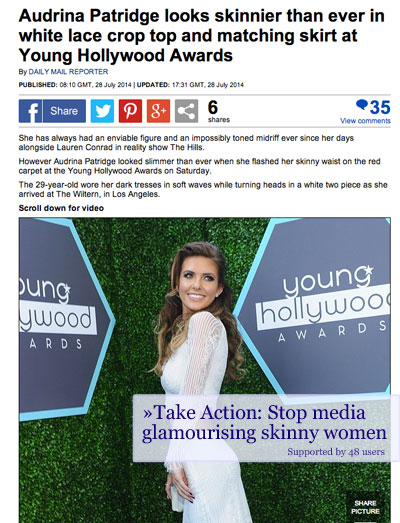 Challenging the media directly: Mockup of how crowdsourced actions, based on annotations, might overlay the web.

The question of which action suggestions are suitable, indeed optimal, for a given story is a tricky editorial concern, perhaps answered with wiki mechanisms also supplied by hypothes.is. So, as well as comments on factuality, the annotating community could suggest and refine the most relevant causes or actions, whether existing or proposed.

One implementation possibility could involve clearly marked, ‘#action’ discussions within the ordinary hypothes.is annotations stream. These could include user votes on preferred actions, again >[marked up, like this, for parsing by another extension]<(http://link-to-action-included-here).

The above is just one example riding the hypothes.is superstructure which could be abstracted for many uses beyond the annotations system.

rbutr exhibits another idea which might be expanded on top of hypothes.is. It blinks up community-suggested rebuttals to a page as it loads. This is not a great departure from the core attraction of annotations, which are themselves often rebuttals, but it shows how something other than text blobs can be the main unit of exchange in an annotations network.

We might see hypothes.is as the basis for a tagging system, whereby any article relating to a given event or subject could be tagged to tie it to other relevant material. Such tagged, curated collections have been implemented in various ways before, but having them fully distributed and closely attached to pages could enrich the process in various ways.

The active hypothes.is development list includes other elaborations, such as a citation needed button or marker, which will act as a call for corroboration of a given fact.

For now, the inchoate hypothes.is and other annotations projects have the task of getting simple annotations off the ground without complicating things. However, once hypothes.is establishes itself, we may see it come to be a generalised meta-network giving shape to criss-crossing activity of allsorts.