Earlier this month, I acted as moderator and technical lead on a hackday in Berlin which brought together journalists, data scientists, activists and others to tell stories about migration in Europe.

The three day event was part of the Slow Politics conference run by the Berliner Gazette. We enjoyed attendance by participants from across the world, with media hackers visiting from as far as Los Angeles and Portugal. 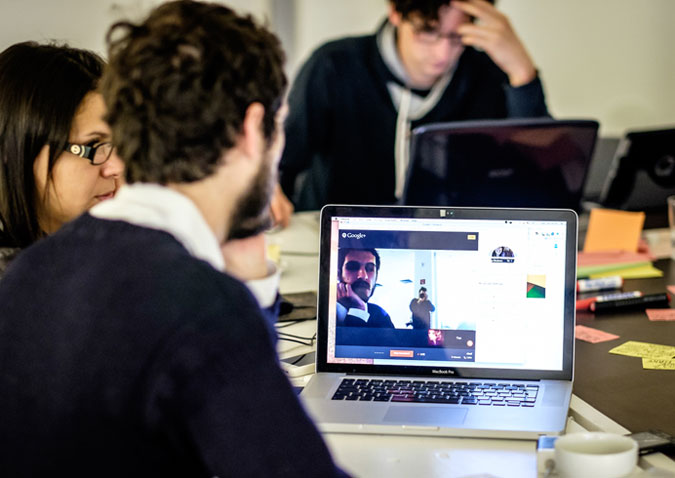 My job was to present the topic, provide associated data, manage the media material, gather the technical pieces into order, write copy to sew the piece whole, and help the team work together to its members’ strengths.

Our focus was Portugal, a southern European country with a stream of emigrants leaving its borders in ever greater numbers, year on year.

After some discussion, we opted to study that phenomenon. We began to piece together numbers, anecdotal evidence, imagery and words to give a sense of how the European crisis has affected the economics and psyche of the nation.

During the event, we were also able to interview two people of Portuguese extraction who left the country and relayed the hopelessness they left their homeland with.

The result was a longform piece which explains and evokes the melancholy of a place losing its people, now visible at the Slow Politics site.

We met Maria on day two of the event and interviewed her to capture the spirit of the problem.

We pulled up the following technologies to craft it:

I’m using the Resonate template for demonstration purposes here in this blog post.

There are so many directions an event like this can take, and it’s easy for a comparatively large team (there were eight of us) to get lost in the ideas.

Thankfully, we came out with a clear story, fresh material and a genuine contribution to the difficult history of Portugal in the context of today’s troubled EU project.

I miss my country but I don’t even know if what I miss still exists.
Maria Vasconcelos, 33, now in Germany with her Portuguese family due to conditions in Portugal

I'm happy to have spent time spinning this up with the good folk on my team, listed in the credits below.

Journalism hackday-storythons are a tricky beast. We had a lot of people working on one core theme, which can spread people thin and lead to lost focus. We managed to avoid that and produce an array of new media artifacts which hopefully illuminate the Portuguese plight.

In preparation for the event, I was asked to gather data on EU migration. There’s a real tangle of it out there and, along with the the Berliner Gazette team, we gathered some interesting numbers in advance of the event.

Some effort is being made to give free, simple access to data for third-party crunching. I sought and sifted data from organisations as diverse as national statistics agencies, established polling groups and citizen crowd-mapping projects.

However, even the best formats still fall short of ideals in open data provision, come riddled with errors and are rarely presented as a core offering alongside research coverage.

There is an ever-greater sense of the utility of packaging data for consumption beyond the initial publication. Neveretheless, I think the cultural and technical shift is far from complete, and there are ample missed opportunities for organisations to put their data in the hands of readers to treat in different ways.

Whilst there are potential complications with messaging, technical follow-up, etc. I am sure this represents a failure of content strategy to see the potential impact of releasing data for others to build on data-led work.

This event was a fascinating mix of people, technologies and ideas. The format can be used to great effect for organisations and objectives of all kinds.

I’m keen to be involved in similar events. I’m available to talk through ideas and get involved in the sport of collaborative, hack-style events and production across the board.